When to Pick Cucumbers? Find out what is the cucumber harvest time, why it is not always the same, and what circumstances may cause it to be earlier or later.

When to Pick Cucumbers?

In the following paragraphs, you will find the days and weeks of growth from the moment of sowing that approximately every variety of cucumber needs until harvest. However, as mentioned above, keep in mind that the development of cucumbers depends on factors such as sunshine hours and temperature as well as particular heirlooms and even the cucumber variety itself. Therefore, these cucumber harvest times are tentative and you should check certain characteristics of the cucumbers to determine the exact harvest time.

When to Harvest Boston Pickling Cucumbers

When to Harvest Cucumber Pickling Northern 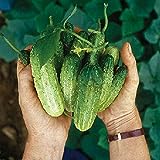 When to Harvest Straight Eight Cucumbers

When to Harvest Armenian Cucumbers

When to Harvest Lemon Cucumbers

When to Harvest Spacemaster Cucumbers

How to Know When to Harvest Cucumbers

Temperature influences when to harvest cucumbers. Therefore, for the same cucumber planting date, cucumbers will not be harvested in Wisconsin and Florida in the same week.

Temperature is a major factor in determining whether harvest time is earlier or later. Here’s why, and below are the keys to detecting when cucumbers are ready to be harvested.

Cucumbers are very dependent on warm temperatures for good development and early entry into production.

In addition to air temperature, the soil temperature is also important for seed germination and root development of young plants. If the soil is too cold, it will take a long time for the seeds to germinate and, when they do, the cucumber seedlings will grow very slowly, if at all, until the soil warms up.

Therefore, in low-temperature conditions (below optimum), cucumber harvest time will be extended, due to slow plant development.

With optimum values, between 73-77 F (23 – 25ºC), an entry into production can be expected approximately in the eighth week, i.e. between 50 and 60 days after sowing, or even a little earlier.

Brightness & Hours of Sun Influences When to Harvest Cucumbers

Brightness & Hours of Sun Influences When to Harvest Cucumbers. As with temperature, for the cucumber to develop quickly and shorten its harvest time as much as possible, it must have good light.

If there are many cloudy or foggy days at the beginning of the crop, the low light will delay the start of the harvest. On the other hand, a succession of very sunny and warm days has the opposite effect, i.e., it accelerates the entry into production.

That’s why the harvest time for cucumbers in Tennessee Georgia, Connecticut, Virginia, North Carolina, Texas, Missouri, Florida, Maryland, etc. may be different for about 1 or 2 weeks.

The above are perhaps the two most important factors in shortening harvest time, but many others can also have an influence.

Normally, when certified cucumber seeds are purchased, information regarding the harvest time, expressed in days to harvest, is usually printed on the package.

How to Know When Cucumbers Are Ready to Harvest

How to Know When Cucumbers Are Ready to Harvest. The above is very good for predicting the approximate dates when harvesting can begin, always considering the climate of each location and growing conditions.

But in small-scale family crops and expert home gardeners, like our readers, all this information may not be necessary. It is very easy to tell at a glance whether the cucumbers are ready to be harvested or whether you still have to wait.

As this vegetable is consumed in an unripe or green state, once the cucumbers appear on the plant, they can be harvested.

How to Know When Cucumbers Are Ready to Harvest – Pickling Cucumbers or Salad?

How to Know When Cucumbers Are Ready to Harvest – Pickling Cucumbers. It all depends on how the cucumbers are to be consumed.

If you want to preserve them in vinegar, then they are picked when they are small. Boston Pickling cucumbers and Pickling Northern cucumbers are the varieties most commonly used for pickling, harvested when the fruit is from 3 to 7 inches long. I would recommend no longer than 7 inches.

Lemon cucumber is an option for both, pickling and salads. Lemon cucumbers are ready to harvest when they are starting to turn yellow and are between 2 and 4 inches long.

On the other hand, Armenian, Spacemaster and Straight Eight cucumbers are the cucumber heirlooms consumed in salads, creams, etc. Measuring the size (long and thickness) of these cucumbers is a good way to determine when cucumbers are ready to be harvested.

Armenian cucumbers, with a mild and sweet taste, should be harvested when are 12” long and 2.5” thick.

Straight Eight cucumbers, with a mild and sweet taste and perfect for slicing, should be harvested when are 8” long and deep green color.

Spacemaster cucumbers, perfect for salads, should be harvested when are 7.5” long.

Why Cucumbers Should Not Be Harvested Late

Why Cucumbers Should Not Be Harvested Late. After the right harvest time passes, cucumbers continue to grow and fatten, but something happens inside them that is not at all convenient: seeds begin to appear and harden.

Once this happens, they are no longer good to eat. The cucumber pulp becomes less tasty or disappears altogether, and all the energy is then concentrated on the seeds.

If you pick cucumbers often, as soon they come out, you may encourage an increase in cucumber plant production.

How to Harvest Cucumber Seeds for the Next Season

How to Harvest Cucumber Seeds for the Next Season. Keep a few cucumbers in the plant after the harvesting time for a few weeks. After this point, these cucumbers are not good for eating but are great for harvesting cucumber seeds for the next year.

If they are left a little longer on the plant and then harvested, their seeds can be used for planting the following year.

How to Harvest Cucumbers