Today we are going to see how to grow cucumbers in Florida, and the whole process of growing cucumbers from planting to harvesting. The cucumber is one of the regulars of our summer garden, which besides being refreshing is quite productive.

This is true as long as we consider certain care for its proper development, such as soil preparation and trellising so that the cucumbers do not spoil or rot. Also, in this article, we will see the step-by-step on how to grow cucumbers in Florida and also how we can obtain our cucumber seeds to be able to sow again in the following season.

Explained in a simple, visual, and adapted to all those who are starting. Because at the end of the day, having our food does not have to be very difficult.

How to Sow Cucumbers in Florida

It is possible to do direct sowing of cucumbers, as in all the species of its family, but it is much better and more sensible to make a seedbed to be able to control the environment of the new plants and at the same time not to have the garden occupied.

When to Grow Cucumbers in Florida

Best Cucumbers to Grow in Florida. The choice of cucumber variety to grow in Florida will depend largely on what we want to use the cucumbers for.

Short cucumbers are preferred for pickles and jarred preserves, while long cucumbers are used in culinary preparations, salads, etc.

It will also depend on the type of trellis we have for growing cucumbers. Trellis with tall structures will allow easy cultivation of long cucumber varieties such as the Japanese Long cucumber.

Cucumber varieties that grow well in Florida are those with optimum growth for USDA zones 8-11. Without drawbacks, most of the cucumber varietals available in the U.S. grow easily in Florida.

Best Cucumbers to Grow in Florida. Some of the cucumbers that grow best in Florida are:

How to Grow Cucumbers in Florida Step by Step

1. We must prepare a suitable substrate for growing cucumbers in Florida. You can buy special substrate for seedlings in any specialized store, or make your own with a mixture of soil with humus, perlite, and coconut fiber.

3. We will place the seedbed in an area with plenty of natural light since the cucumber seed needs sunlight to grow and develop properly. Make sure not to flood the substrate as fungus could appear, you can sprinkle cinnamon on the substrate to avoid the appearance of fungus.

It is important to know that just as when planting zucchini, the cucumber crop is quite productive. So, if you don’t want to end up being fed up with cucumbers this summer, don’t plant too many. With Florida’s sun and climate, cucumbers develop perfectly.

Do Cucumbers Need Support to Grow?

The technique of trellising cucumbers is a widely recommended practice for this vegetable since its plant is a vine, the first thing to do is to try to get it entangled or supported by a stick or rod. It is a practice very similar to trellising peas or trellising tomatoes.  That is why the main tools are wire fences, mesh or strong threads, as well as rods and sticks to give it a path.

In this way, the cucumber plants will not occupy much space in our garden and have the advantage of making it easier to care for them, especially in small gardens, as well as in planting sites where you want to make the most of the space.

When planting cucumbers it is important to consider that if they are left to grow freely they will end up watered by the soil, so when the plants begin to bear fruit we must place some support or tutor to the cucumbers so that they do not touch the ground or else they will start to rot.

After trying a few commercial trellises, this is the best trellis for cucumbers I have found. 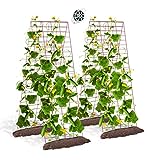 How to Water Cucumbers in Florida?

Cucumbers are very demanding in water, since their large leaves transpire a lot with heat, especially with low humidity.

Soil for Cucumbers in Florida

Cucumber can be grown in any type of soil, the main factor to consider being optimal moisture conservation.

Keep in mind that cucumbers need large doses of water due to the size of their leaves and the continuous production of compact fruits with weights of 0.4-0.6 lbs. (200-300 grams).

Cucumber needs a soil depth of at least 16”- 20” (40-50 cm), so a good deep plowing of the soil and removal of any obstacles such as stones or high-water tables is required.

The soil pH of cucumber is usually between 5.5 and 7. That is why Florida soil is ideal for growing cucumber.

How Many Cucumbers Do You Get Per Plant?

How Many Cucumbers Do You Get Per Plant? According to data from the ASABE (American Society of Agricultural and Biological Engineers), in which the yields of different varieties of cucumber are mentioned, it seems that each cucumber plant usually bears between 11 and 16 fruits, throughout the growing season, and in the case of cucumber harvested for salad.

Diseases and Pests of Cucumber

The cucumber, like all plants of its family, tends to have many fungal problems in the more temperate regions of Florida. Apart from certain pests, such as whitefly or red spider mite, many of them can be easily combated by always being attentive during the cultivation process.

Another problem that we usually encounter in the cultivation of cucumbers is that they have a bitter taste when harvested.

If you find cracked fruits, it is usually due to irregular irrigation of the crop during periods of drought. It is important to water regularly and continuously.

On other occasions, it usually happens that our plant does not produce female flowers, which are the ones that will give us the fruit. If we have this problem, it is usually because the plant is not yet ready to produce fruit.