As our expert gardeners, readers of The Garden Style, surely know, succulent plants are especially susceptible to excess humidity.

In case of excess humidity, succulent plants quickly lose the balance of microorganisms that live in contact with them. The balance of life at the root and leaf level is easily lost, and the progression of pests that infect succulents causes rapid deterioration.

Excessive humidity on succulent plants contributes to the proliferation of certain fungi and bacteria that damage the structure and make succulents sick.

Our readers have sent us some photos and questions about the presence of black spots on various plants and fruit trees. In this article, we will deal exclusively with the presence of black spots on succulent leaves and succulents in general. The questions that we frequently receive from our readers on this subject are: What Are the Black Spots on My Succulents?  What Causes the Black Spots on Succulents?

Various species of mold cause deterioration of succulent plant structures such as leaves and roots. One of the signs of infection and deterioration is characterized by the presence of black spots on succulents.

We will first review the molds (fungi) that cause black spots on succulents and then look at other situations that can cause dark coloration and pigmentation of succulent leaves.

Black spots on succulents can be caused by the fungus Alternaria cucumerina and more species of Alternaria which cause the plant disease Alternaria with the damage associated with its mycotoxins. Certain food crops such as cantaloupe melon, watermelon, squash, cucumbers, and even tomato crops, can also be affected so drastically that if not treated quickly, all products can be lost.

Let’s start by examining a fungal disease called Alternaria. Alternaria is an ascomycete fungus, a plant pathogen. The first symptoms of this disease are what you can see in the picture.

However, little by little these black spots on succulent leaves increase. There are many different species of Alternaria, so they can attack a wide variety of crops. For example, some of the most affected plants are tomato, parsley, roses, carrots, tobacco, cabbage, wheat, etc. It is said that 20% of agricultural losses are due to attacks by this disease.

The diameter of the spots increases with time. Older spots are circular or irregularly shaped and brown to black in color. Occasionally, older spots may have concentric rings. These black spots on succulents contain fungal spores that are airborne and can contaminate and infect other nearby plants. Individual spots become brittle at the leaf level of succulent plants and may tear, taking on a frayed appearance within the blackish tissue that is observed.

If the succulent plants are located outdoors and there are prolonged rainy days it is advisable to cover the plant beforehand or try to dry the leaves with a cloth.

The same is applicable for indoor succulents when getting wet during watering, it is convenient to dry the wet leaves with a cloth.

How to Get Rid of Black Spots on Succulents Caused by Alternaria. As for the elimination of Alternaria, since it is a very harmful fungus and easily spreads to other plants, we recommend not applying home remedies and using commercial fumigants.

One of the causes of black spots on succulents is due to the presence of the fungus commonly called “sooty mold” (Capnodium citri).

Sooty mold, also known as black mold, is a saprophytic fungus, i.e. it feeds on decaying matter. Capnodium citri develops superficially and feeds on the carbohydrate-rich structures of plant tissue.

The Sooty mold (Capnodium citri) proliferates on succulents where white mites, mealybugs, and aphids are present. They do not parasitize the plant but interfere with photosynthesis so we will see a weakened plant and leaves with delayed development.

This is not a fungus that is harmful to succulents, despite the black spots. However, the presence of these black spots on succulents caused by the sooty mold is a sign that we should look for another pest that feeds on the succulent’s sap and will deteriorate it, such as mealybugs, aphids, whiteflies, etc. And this is a wake-up call.

How to get rid of black spots on succulents caused by sooty mold (Capnodium citri). The first thing to do is to eliminate the insect pest that causes the development of sooty mold.

This treatment does not affect the succulent plant and is not toxic to it. If after cleaning two or three times, the sooty mold is not eliminated, it may be necessary to use a fungicide for this purpose. For this, we will need a commercial copper-based fungicide. Follow the manufacturer’s instructions so as not to over-treat the succulent plant. This commercial copper-based fungicide is our recommended option because is effective and spray easy to use because is ready to use. 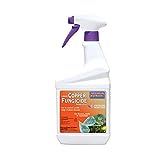 Once the disease has passed and the insect pest that caused it has been eliminated, your succulent plant will appreciate being fertilized according to its needs. At the beginning of spring and autumn, improve the substrate for succulents and nourish them adequately. we may prepare your homemade fertilizer or use a commercial fertilizer suitable for succulent plants.

Black Spots on Succulents Caused by Cercospora. Let us continue with another disease caused by the mold named Cercospora which is manifested with black spots on succulent leaves: the Cercosporiosis plant disease.

In this case, the dots do not increase so much in size. However, if the infection is very strong, some spots may join with others. They usually affect the older leaves of the succulent plant but also the rest of the aerial organs.

High temperatures (between 77-86 F or 25-30 C) and high humidity are the ideal conditions for the development of Cercospora.

How to Get Rid of Black Spots on Succulent Leaves Caused by Cercospora. Cercospora mold causes Cercosporosis to overwinter in garden debris and come into play year after year unless you intervene. Take time to clean up the garden and pick up fallen leaves and infected plants.

Get Rid of Black Spots on Succulents Caused by Cercospora. Some general tips to avoid this disease and protect your succulent plants are:

Succulents Turning Brown or Brownish-Black. Other types of black spots can also appear on succulents, which can be brownish-black or dark, and instead of being like spots that grow, they appear in an extended form covering the entire leaf or several leaves.

The dark spots on succulent leaves caused by molds should not be confused with the succulents turning brown, or dark colors.

Succulents turn brown when there is a rotting process associated with the root. As in the previous examples, it is caused by an excess of humidity, but in this case, molds and bacteria are affecting the root causing its rotting. This is why the succulent leaves are turning brown and dying.

Overwatering is the most common cause that kills succulent plants. Yellow-yellowish, turning brown and soggy leaves on your succulent because of over-watering. Succulent Leaves Turning Brown? What Happens with My Succulent? Always remember to check the soil before watering. It should be dry. The key is to understand how to water succulent plants.

Spots on Succulent Leaves Due to Nutrient Deficiency

Discolored spots on succulent leaves may be caused by a nutrient deficiency in plants (guide).

It is always advisable to verify the type of spots. We strongly recommend consulting the guide on nutritional deficiencies in plants to identify if the spots observed on the succulent leaves are due to the lack of nutrients or, on the contrary, to the presence of molds and pests.