Growing Cilantro (Coriandrum sativum L) is not an easy task, as it is a bit tricky to get cilantro to grow in some types of soil. That’s why in this article we will explain how to grow cilantro in water. You will see that growing cilantro in water is the best way to grow and regrow cilantro easily. Also, I include a few tips for harvesting cilantro successfully.

You will need the following materials to grow cilantro in water: 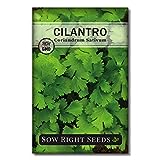 How to Grow Cilantro in Water Step by Step

So to the recurring question from our readers, can cilantro grow in water? Yes, it is possible to grow cilantro in water, easily at home. The simple method that we propose in this article, would be something like a home hydroponic cilantro gardening, easy to have in your kitchen, without anything sophisticated, without hydroponic pumps, a very homemade method.

Once we have all the necessary materials to grow cilantro in water, we will follow these steps:

In a few days, you will see how cilantro begins to grow in water. After a month, you will have beautiful cilantro plants. As an extra tip, I recommend changing the cilantro water every week. Besides paper napkins, you can use cotton to grow Coriander in water.

When to Grow Cilantro in Water?

When to Grow Cilantro in Water? We can grow cilantro in water all year round as long as our water container is indoors.

How Tall Does Coriander Grow?

How Tall Does Coriander Grow? Cilantro (Coriandrum sativum L.) is a widely consumed annual aromatic plant of the Apiaceae family, which grows between 30 and 70 cm in height.

Does Cilantro Regrow After Cutting?

Does Cilantro Regrow After Cutting? Yes, cilantro regrows. Cilantro always grows back after cutting it.

The ideal is to have several cilantro plants to give them time to regrow after cutting them.

Can Coriander Grow in Shade?

Can Coriander Grow in Shade? Put the pot or container of cilantro in a sunny spot. Cilantro needs a lot of sun to grow, so put it in a window so that it enjoys as much sunlight as possible.

Most Common Problems When Growing Cilantro in Water

Growing cilantro in water is not difficult, but it has certain requirements:

Can You Grow Cilantro in Water

Can Coriander Grow in Water

Can Coriander Grow in Water? Many people ask us if coriander can grow in water, and the answer is YES!!!. Coriander is the same as cilantro, it is the same plant but can be said in different ways. The scientific name for Cilantro or Coriander is Coriandrum sativum.

The word “Cilantro” is Spanish for “Coriander” although it is known by both names all over the world.

Benefits Of Cilantro. Cilantro is a plant that has many benefits, and they are the following: