Wasabi (Wasabia japonica), also known as Japanese horseradish, is a plant native to Japan, cultivated mainly for its thick underground stem. Learn all about how to grow Wasabi in this article.

This rhizome is highly prized in Japanese cuisine, and its cultivation is increasing in the West as well. The Japanese production of wasabi does not even meet its domestic demand and the plant is considered a difficult plant to grow.

In this article, we explain the ideal soil, planting season, climate, light conditions, and watering frequency for growing wasabi. Enjoy your reading!

Cultivation should be in places with moist soil, rich in organic matter, usually under large trees that provide shade and help to keep the environment moist.

The soil should retain water well, remaining constantly moist, but should not be waterlogged or flooded. Wasabi grows well in running water with a good concentration of oxygen, not in flooded soil with stagnant water.

Another alternative is to grow in hydroponic systems. The pH of the water and the soil must be between 6 and 7, both in this type of cultivation as in the previous one. Learn more about How to Measure Soil pH.

Wasabi or Japanese horseradish grows well in cool and humid climates. Ideally, the temperature should remain between 46°F and 68°F (8°C and 20°C). Places that have temperatures above 82°F (28°C) are considered unsuitable for cultivation.

In regions where the temperature drops below 27°F (-3°C) the aboveground part of the plant dies, but it can still survive and regrow when the temperature is suitable again.

The plant grows best in partial shade, although it can also be grown in direct sunlight in regions where the climate is mild even during the summer.

How to Grow Wasabi Step by Step

Wasabi or Japanese horseradish is usually grown from shoots or seeds. It is also possible to use pieces of the rhizomes, but this route is less common. Wasabi seeds (Order here).

The branches of a plant are taken after harvesting and utilized to reproduce it. So harvesting and planting are often carried out at the same time, as the larger shoots can be planted directly on the permanent site.

The smaller ones can be planted in pots left on trays with water so that the potting soil does not dry out. They must have a healthy appearance, at least 1.6″ (4 cm) high and at least 4 leaves. There can be up to 20 shoots on each plant.

The seeds usually do not germinate if they do not go through a long period of low temperatures. So it is necessary to leave them in a refrigerator at 41°F (5°C) for two months to break dormancy before sowing them. The time required can vary depending on climate and growing conditions.

Sow seeds in seedbeds, modules, trays, and other containers at least 4″ (10 cm) high, with 0.4″ (1 cm) of soil covering the seeds. Germination occurs in up to three weeks. 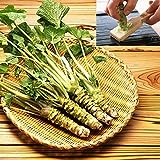 When the seedlings have at least 4 leaves and are 5 cm tall, which takes 4 to 6 months, they can be transplanted to a partially shaded bed.

Leave the seedlings 2″ (5 cm) apart, with the crown 0.4″ (1 cm) above the soil surface. About two months later, the seedlings will be approximately 4″ (10 cm) tall and can be transplanted to their final location.

The rhizome pieces are placed in containers containing soil or sand and kept constantly well moist, preferably at room temperature around 50°F (10°C).

The shoots can take two months to start appearing, and when they have 4 or 5 leaves, they can be cut from the rhizome and transplanted as indicated in the previous paragraph.

The plants can be spaced 12″ (30 cm) apart in their final placement. When transplanting, be sure to leave the crown about 0.4″ (1 cm) above the soil surface.

How to Grow Wasabi in a Pot

Wasabi can be grown in pots of at least 12″ (30 cm) in diameter and height. To keep the soil moist, place a shallow container of water under the pot.

It is important to remove weeds that are competing for nutrients and resources, especially when planting in soil. In semi-aquatic systems, there are fewer problems with weeds.

How Long Does Wasabi Take to Grow

Wasabi is eaten as a paste or grated. When freshly grated, wasabi retains its color and complexity of flavors. The flavor is quite pungent, similar to that of horseradish, but not identical. The leaves can also be eaten and have a less pungent flavor than the rhizome.

How Is Wasabi Made?

To make wasabi paste we have to grate the stem with an Oroshigane (special wasabi grater). Circular movements are made in the grater, until obtaining a paste that we will join with the help of a small bamboo brush. Once grated, it is best to let it rest for two or three minutes and consume it immediately after, since, after 15 minutes, it loses its flavor and spicy qualities.

Authentic wasabi has a complex flavor, first spicy followed by a sweet taste. It should be noted that it is not spicy in its natural state. Once the root is cracked and turned into a paste, the hot vapors that give the spicy sensation are released. It is a spiciness that stimulates the nostrils but does not last long, which allows continuing eating without problem, since the spicy sensation does not accumulate (as it can happen with hot chili, for example). 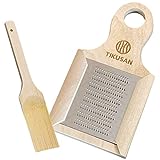