In this article, we will teach you everything you need to know about how to care for bonsai Azalea in the best way. The genus Rhododendron belongs to the family Ericaceae and is one of the largest genera in the plant kingdom.

Its leaves are simple, alternate, and grouped at the tips of the branches, thin and elliptical, ovate or lanceolate in shape, although in some species they can be round. The deciduous species color their leaves in shades from gold to red, passing through orange.

Its flowers, simple or double, have five petals, bell-shaped or infundibuliform and even with frilly edges and, like the leaves, are grouped in clusters at the tips of the branches and their colors can be spectacular but generally range from white to pink through red. In some species, the flowers are solitary or are borne in the axils.

It is a genus widely used as an ornamental plant and prized for cultivation as flowering bonsai and some of the best-known species of Rhododendron, many of which are cultivated as bonsai.

How to Care for Bonsai Azalea

This bonsai is neither one of the most difficult to care for nor one of the easiest, we could say it is in the middle. But by reading all the facts we have to offer about this amazing bonsai you will be able to know how to care for bonsai Azalea correctly.

The location is a very important point to take into consideration for the care of the bonsai Azalea. Outdoors all year round, avoiding prolonged exposure to the sun during the hottest season and especially after repotting, during which time it should be placed in a well-lit area without direct sun. Under the shade of larger trees in the midday sun is a good location.

Watering should be done thoroughly until water comes out of the drainage holes and when the surface of the soil begins to dry out, avoiding leaving the soil completely dry, as they are very sensitive to lack of moisture, but without becoming permanently waterlogged.

Since it needs acid soil, it is necessary to use water as soft as possible, that is to say, water that is low in lime, otherwise we would be reducing the acidity of the soil and risk causing chlorosis. Correct watering will be excellent care for our bonsai Azalea.

Fertilize frequently with a quality organic fertilizer, especially during the period of vigorous growth (spring) and autumn; and reduce or eliminate fertilizer in the periods when it stops growing (winter and periods of maximum heat). However, we should stop the supply of fertilizer at the beginning of the formation of flower buds and until the end of flowering to avoid spoiling the flowering. It is advisable to add from time to time some iron supplement in the form of chelate (Order it here).

For correct care of the bonsai, Azalea never fertilizes a repotted tree, waits for it to sprout. We use this fertilizer on our bonsai and highly recommend it (Order it here).

It is essential to repot our bonsai Azalea for correct care of it. Every 2 or 3 years in spring and preferably after flowering so as not to weaken it and lose the flowers of the year.

During repotting it is advisable to remove any rotten roots, do not completely remove the soil to keep part of the fungus that acts in symbiosis with the roots of the plant, and prevent them from drying out due to prolonged contact with the air.

It is not mandatory, but if we use rooting hormones with fungicide, we facilitate the success of repotting.

A good soil mixture could be: 100% Kanuma (type of Japanese soil) or any acid soil or mixture, for example, heather soil, being suitable an acidity with a pH between 4 and 5. Kanuma soil (Order it here).

If we cannot get soil with adequate acidity, we can decrease the pH using:

– fertilizers based on urea or ammonium sulfate.

– plant remains of the genus Pinus.

As already mentioned, it is advisable to protect the tree after repotting for a couple of months, placing it in a well-lit place but avoiding direct exposure to the sun. 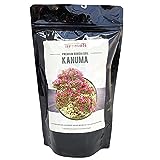 It should be kept in mind that generally one of the reasons it is grown is because of its beautiful flowering and, therefore, the most appropriate time for pruning is after flowering.

The new shoots that appear after flowering during the summer can be cut or topped, leaving two or three to keep the vigor of the tree under control and to model its figure according to the chosen style.

The roots should be pruned during repotting but without cutting too many fine roots to allow them to recover during the winter. You should also take advantage of pruning unwanted branches.

New shoots are pruned in late summer or early autumn when their wood is mature.

In any case, it is advisable that between the pruning of branches and repotting (or vice versa) there is a minimum interval of 3 weeks.

It is advisable to remove fading flowers.

Finally, remember that pruning should only be done if the tree is healthy. Bonsai pruning tool kit (Order it here). Learn more about How to Prune Bonsai. 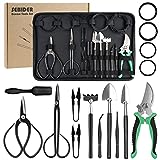 The placement of branches by wiring can be done between spring and summer, after flowering, taking care not to damage either the bark, which is very delicate, or the branches due to their fragility. It is not advisable to wire branches that are too young and not sufficiently lignified, nor the thickest branches.

It is advisable not to water the day before wiring.

Its roots are very fine and for this reason, they are very difficult to shape in styles on rocks.

Whenever possible, it is advisable to use other techniques to shape the crown, such as pruning, tensors, weights, etc.

A tree that looks like a “skein of wire”, because of the excess of wire, loses all its lively aspect and is not a better specimen as a bonsai. Please wire just enough and only when other shaping techniques cannot be used or have not achieved the desired effects.

Where to Buy Bonsai Azalea?

If you don’t have one of these beautiful bonsai yet and you are interested in having one, here are the best bonsai Azalea sellers. 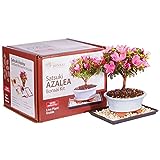 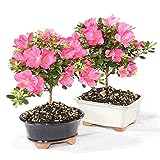 We hope this article on how to care for azalea bonsai will be helpful.