Surely you have heard of the popular Dracula Orchids, a genus that stands out and attracts everyone’s attention due to its animal appearance. In today’s content, we will explain one of the best-known species of this genus, the Monkey Face Orchid or Monkey Orchid, which is scientifically known as the Dracula simia.

The Monkey Face Orchid is one of the rarest species of orchids in the world, it also possesses characteristics that make it a unique orchid. Many people want to grow them at home, but what they don’t know is that it will take more than 7 years to achieve its flowering, so it will be a slow and careful process.

We could not fail to mention everything about this orchid, you will know its general characteristics, the places where this species is distributed, and how to successfully achieve the cultivation of a Monkey Face Orchid. Read this content and learn all about the famous Dracula simia.

When naming the Monkey Face Orchid many people wonder if it looks like the face of a monkey and the answer is yes, in fact, this is one of the reasons why it is known in this way and was etymologically named as simia, associating it to the appearance of these animals.

The monkey effect can be seen in the interior of the plant that has a kind of eyes, nose, and mouth with similarity to that of an ape. Really if you have the opportunity to appreciate closely this orchid you can notice how it has every detail of these animals and even shows a furry texture that gives it realism.

The discovery of the Monkey Orchid took place in 1978 and since then it was one of the species that aroused the curiosity of all botanists, Luer was in charge of carrying out the research and description of the Monkey Face Orchid. The Draculas Orchids have a variety of species in the world that belong to one of the largest families of the Plantae Kingdom, the Orchidaceae.

Monkey Face Orchids are considered exotic flowers because of their shape and the shade of colors they offer, but what many people do not know is that it is one of the genera that will soon be in danger of extinction. In addition, some people do not know exactly how to take care of them, so they end up dying in the middle of their development. For this reason, it is advisable to buy a Monkey Face Orchid when you have previous knowledge.

The best thing about Monkey Face Orchids is that they are easy to bloom, if you are patient and take note of all their care you will be able to enjoy their blooms. Tell us! Have you noticed the Monkey Face Orchid?

Below, we explain all the characteristics you didn’t know about the Monkey Face orchid:

Dracula simia is an epiphyte class plant, which is mainly characterized by growing on trees. Most epiphytic plant species are hardy and do not feed on this plant as many believe since it has been scientifically confirmed that they are not parasitic plants. But what do they feed on? Mainly from rain, humidity and they obtain energy from light for this reason they look for the best location in the trees.

In addition to its particular monkey-faced shape, this orchid has a pleasant aroma. It is generally associated with citrus aromas, becoming one of the weapons of this species to attract all its pollinators for fertilization.

It could be said that the Monkey Face Orchid is a plant that loves cold climates and humidity, where it can withstand low temperatures and develop properly. As for its size, it is a small plant and does not have a key feature of epiphytes, the famous pseudobulbs or storage organ as many know it.

Surely you wonder what will happen if it is in a time of drought and it will not have any problem, due to its pointed green leaves that store nutrients, that is, they fulfill the same function of the pseudobulbs that allow the Monkey Face Orchid to survive in drought conditions.

One of the main characteristics of this species of Dracula is that its flowers are very delicate, as well as its stem. In addition, identifying them in their natural habitat is not an easy task since it has dark colors that can be confused, and because it is a small plant you will not be able to perceive them with the naked eye as quickly as you think.

The Monkey Face Orchid is a plant capable of blooming at any time of the year and if we pay attention to its needs, it will offer us up to two blooms every year. I dare say that Monkey Orchid flowers are one of the most beautiful and strange in the world because of their ape-like appearance.

Monkey Orchid presents a variety of tonalities, mainly its dark reddish colors that are confused with brown, and its light tonality in the center of the flower stands out. The labellum of this orchid is hairy, the part that resembles the nose of the monkey is the reproductive organ of the plant and has a white color.

There is no doubt that the flowers of the Dracula simia are spectacular, as we mentioned above, the main feature of this orchid is its orange scent and they require some care.  If you want a Monkey Face Orchid that will impress all your guests you should read on to learn about its cultivation.

Where Can We Find Monkey Orchid?

Monkey Face Orchids are native to Ecuador and are distributed in the mountainous regions of Colombia and Peru. They are plants that live in tropical forests and to see a specimen of this species you will have to walk 3280 to 6630 ft (1000 to 2021) meters above sea level, which is where these epiphytic plants develop. 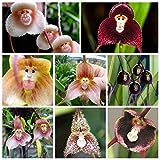 Dracula simia – Everything You Need to Know

Dracula simia is one of the best-known orchids and belongs to one of the largest genera of plants, it is said that there are more than 100 confirmed species. In this article we decided to mention everything you need to know about this orchid, we detail its care and conditions where it develops:

The basic care of the Monkey Face Orchid will allow us to determine what conditions we must adapt to have a healthy development. These are orchids that love cold climates and that have a high percentage of humidity, it is recommended between 70% and even 80% of humidity in the cultivation of the Dracula simia.

The illumination in the orchids is one of the indispensable factors, however, species like the Monkey Face do not resist direct sunlight. It is advisable to place Monkey Orchid near the window or buy a screen that will make the sun’s rays are not so intense and receive the right amount.

As for watering it is necessary to keep the Dracula orchid fresh, it is advisable to water Monkey Orchid twice a week and evaluate how it behaves with this amount of water. Also, you should not drown its roots as it will end up getting sick.

Plants have been used as natural remedies for years because of their medicinal properties. The Monkey Face Orchid is not only fascinating for its monkey-like appearance or fragrance but also for its antibacterial properties that are capable of eliminating or fighting microorganisms harmful to our body.

There are many benefits of the Monkey Face Orchid that have been proven by experts, however, because it is one of the species that takes a long time to bloom and its cultivation is a long process, it is not usually used for medicinal purposes. It is for this reason that the tea made from the flowers of the Monkey Face is not common.

Surely you did not know this fact about the Dracula simia, this is not the only benefit it has, people who have had the opportunity to use it claim that they are ideal to raise the defenses, give a feeling of rejuvenation to the skin, and is even good for the eyesight.

The germination of seeds is a process that is developed to acquire after a certain time a plant, in this case, the monkey face orchid. In germination, it is necessary to take into account the conditions of development of the orchid such as; light, water, humidity.

It is necessary to buy quality seeds and in a store that assures us that the seeds we select correspond to the species Dracula simia. Also, it is important to select the right container (glass bottle) for the germination of the seed, it is said that after two years we will begin to appreciate the small stems and leaves of the Monkey Face Orchid.

There are many orchid germination processes where you can stimulate the germination of the seeds or simply prepare them a day before germination by soaking them and then storing them in a dark place. However, the Monkey Face Orchid is a difficult species to germinate and it is possible that if it is not at the right temperature, you will not get the desired results. Monkey Face Orchid seeds (Order it here).

If you are wondering how to plant monkey face orchid seeds, in this content we explain everything you need to know. First of all, Monkey Face Orchid seeds are small and delicate and you will need a lot of patience to appreciate their blooms.

We must prepare the substrate for the orchid seeds, select a small container and look for the best substrate for epiphytic plants. When you notice that the stems and leaves begin to grow it is time to repot it to a larger pot. Learn more about Best Soil for Orchids.

As we mentioned it is a slow process so you don’t have to hurry, just adapt to the environment and after a few years, you will notice how your orchid starts to form. When planting seeds it is advisable to moisten them to speed up the process, do not overdo it, it will only be a little water.

These are some tips to follow if you want a Monkey Face Orchid at home. Also, we invite you to consult our complete articles on the integral care of orchids, you will find all the information you need.

Learn more about How to Propagate an Orchid.