Lupine flowers, also known by their scientific name Lupinus polyphyllus is a plant native to the northwestern part of the United States. From there it has spread to a large part of the world for its great ornamental qualities. Learn all about how to plant Lupine seeds in this article.

Lupine is a legume that can be perennial or annual. In the aerial part of the plant, we distinguish two parts, the foliage which is green with alternate leaves, and petiolate. The other part is the flowers by their shape and color we can say that they have their own entity.

Let’s review how to plant Lupine seeds and enjoy these beautiful flowers.

How to Plant Lupine Seeds

How to Plant Lupine Seeds. To grow Lupine, we need slightly acid soil with a good drainage system. Several of the diseases that can attack this plant are produced by various fungi that, as we know, grow easily in poorly or poorly drained soils. Follow these steps to learn how to plant Lupine seeds.

Lupines are short-lived perennial plants, even in optimum temperatures and growth circumstances, generally living between 2 and 5 years.

According to the Missouri Botanical Garden, Lupine plants dislike the heat and humidity in USDA Zones 7-9 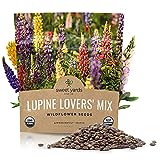 When To Plant Lupine Seeds?

Lupine Flowers Care – Pests and Diseases of Lupines. It does not have excessive problems. In fact, the function of the aforementioned alkaloids is precisely a defense mechanism of the plant against the ingestion of herbivores and certain pests such as aphids, thrips, etc. That is why Lupine Flowers are so rustic.

They can suffer from cryptogamic diseases such as Fusarium or Botrytis but it is not common. Perhaps if it occurs in climates somewhat more humid than it should or with excessive watering. In a normal crop, they should not appear.