When to Harvest Japanese Eggplant

How to Harvest Japanese Eggplant

Leave a small stem on the Japanese eggplant so that it keeps better for longer. The University of Georgia recommends never twisting the fruit to avoid damaging the plant, that is why you should use sharp and disinfected tools to make a perfect cut on the eggplant plant.

Japanese eggplant will continue to produce fruit throughout the summer until autumn when the first frosts begin. Observe your eggplant plant daily to harvest the Japanese eggplants that are ripening day by day.

How to Grow Japanese Eggplant

These are the basic steps to grow Japanese eggplant, if you want to know more, we recommend our article about how to grow eggplants. Once the eggplant fruits have grown and ripened, you only need to apply what you have learned in this article on how and when to harvest Japanese eggplant. 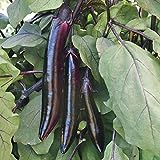 There are many varieties of Japanese eggplants, but almost all ripen in the same amount of time. Remember to observe the brightness and size of the fruits to know when to harvest Japanese eggplant.