The Casper eggplant has its origin in France, this variety is well adapted to grow in small places and with short growing seasons as it is in the northern latitudes. Continue reading to learn how and when to harvest Casper eggplant.

When to Harvest Casper Eggplant

So, to know when to harvest Casper eggplant, you should count the days of maturity and observe the condition of the fruit. A ripe Casper eggplant fruit will have firm skin and bright white color. The size of the white eggplant is from 5” to 7” (13 to 18 cm) long.

How to Harvest Casper Eggplant

How to Harvest Casper Eggplant? Harvesting Casper eggplant is very easy. First, you will need to use a pruning shear or sharp knife. Be sure to disinfect your tools with alcohol before harvesting eggplant. Not all Casper eggplants will ripen at the same time, and therefore you must use sharp tools to make a perfect cut and avoid damaging the plant.

Select the Casper eggplants that you observe mature, as mentioned above you should look at the brightness of the skin and the size of the eggplant. Then with the pruning shears or knife cut the stem of the eggplant and leave a small stem on the fruit for better preservation and to maintain freshness.

As not all eggplants will ripen at the same time you must make a perfect cut to avoid damaging the plant, this way the plant will continue to produce fruit. It is important to always disinfect the tools with alcohol before harvesting.

How to Grow Casper Eggplant

Place the seedbed in a place where it receives sunlight and maintains humidity. Mild sunlight is preferable. In a few weeks, you will have your Casper eggplant seedlings.

Once the frost has passed and the soil temperature is 60 °F (16 °C) or above, you can repot your Casper eggplant seedlings. Apply mulch to conserve moisture and prevent weed growth. Maintain soil moisture, but do not overwater.

The ideal soil pH for Casper eggplant growth is between 6 and 6.5. You can learn more about pH in plants in our article about how to measure soil pH. I recommend applying fertilizer during the growth stage of Casper eggplant. 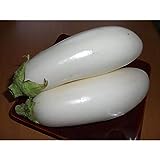 How Does White Eggplant Taste

How Does White Eggplant Taste? White eggplant has a slightly smoky mushroom flavor. With its mild flavor very similar to mushrooms, white eggplant is ideal for preparing stews and soups. Some people also make roasted white eggplant, and it is very tasty.

I hope this article about when to harvest Casper eggplant will be useful, and you will be able to harvest white eggplant at the right time. I recommend our other articles about different varieties of eggplant:

How and When to Harvest Japanese Eggplant

How and When to Harvest Rosa Bianca Eggplant