The carnation is an authentic icon within Spanish culture. The Dianthus caryophyllus, which means the flower of the gods, is one of the flowers most closely linked to Spanish folklore, especially in the south of Spain due to its use in festivals such as the famous April Fair in Seville. In addition, the language of flowers represents feelings such as love and joy, closely linked to the spirit that Spain tries to transmit to the rest of the world. If you were wondering what is the national flower of Spain, we invite you to learn, here in TheGardenStyle, everything you need to know about the carnation, the national flower of Spain.

The National Flower of Spain

You have probably wondered why the carnation is the national flower of Spain. So, to understand its close relationship with Spain, let’s talk a little more about its origin and use.

Carnations, as their name indicates, are flowers linked to religion, and Spain is a country closely linked to Christianity. For this reason, it is one of the most cultivated flowers both in Andalusia and in Aragon, since, besides blooming all year round, they are used in different festivities of the Spanish tradition. From as a flower linked to Easter, by the biblical reference where the tears of the Virgin Mary when she lost her son became carnation petals, to the joy and devotion of the pilgrimage of El Rocio.

In addition, the carnation is the flower most associated with flamenco, a World Heritage Site, used by singers, composers, and dancers in their shows. It is also linked to the bullfighting culture and other national festivals and celebrations, such as the Day of the Pilar, and as the starflower of the famous patios of Cordoba.

The carnation is so important for Spain that there are more than 25 species of carnation. Thus, this is one of the most given and cultivated flowers not only in Spain but also in the rest of the world. (Order seeds here). 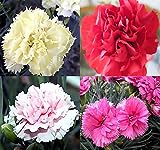 Characteristics Of the National Flower of Spain

The carnation is scientifically called Dianthus caryophyllus and these are its characteristics:

Learn more about How to Grow Carnations.

Below, we would like to offer you the basic care that carnation needs to be grown in pots or your home garden. Follow these simple tips to decorate your home naturally.

Now that you are more familiar with Spain’s national flower, you may remember that you have heard of air carnations or tillandsias. We want to clarify that they are not the same as carnations, which are the Spanish national flower, but other plants, although equally beautiful and curious. Learn more about How to Care Air Plants.